Couple of weeks ago, we released our new SaaS app MagicFlow (2K+ MRR) to the public after a 1.5 months beta period.

In this post, we wanted to quickly share how we validated the idea, how we got the initial traction and what we have done so far.

This is the first post of an ongoing series about our startup journey. Stay tuned for more updates!

MagicFlow was born out of the need to build landing pages for the products we were working on.

We are solopreneurs building a few products on the side. When it came to writing copy for our landing pages, we always used to get stuck. We either had to settle with the sub-standard copy we wrote ourselves (hey we are not copywriters) or hire a copywriter, which was always an expensive option.

We wished there was a tool that could take the pain out of creating great copy for our landing pages and other content.

Coincidentally, we had been playing around with GPT-3 for a few weeks.

GPT-3 is a state-of-the-art generative language model that can learn the patterns in text and then generate new text based on these patterns.

It got us thinking, “can we use GPT-3 to generate landing pages from short descriptions of the product/service?“.

After a few days of tinkering with GPT-3, we were able to generate pretty good landing pages from just a few lines of input.

At this point, we were convinced that we were onto something.

We decided to build an MVP and test if our assumptions were correct.

Using my previous app’s boilerplate code, we were able to build an MVP within 2-3 hours. All the MVP did was to take a short description of the respective product/service as input, pass that through OpenAI’s API, parse the results from the API and replace the relevant sections in a sample landing page template.

With just a few lines of code, we were able to put together a simple MVP.

Then, we recorded a video demo of the MVP using QuickTime, added some animated text using Canva, picked up a nice non-copyrighted audio track from YouTube and put it all together using iMovie.

Finally, for our landing page, we used a cool template from cruip.com and got the images for the page from Undraw.co.

We used our own MVP to generate the copy for all the sections (header, features, and CTA) of our landing page.

We also used the Waitlist API to quickly set up a waiting list for early access to the product.

All the heavy lifting was done in just a few hours.

The next morning, we launched on Product Hunt.

We were super excited, but also nervous.

We were expecting high traffic on Product Hunt but had no clue whether people will like our idea or not.

Surprisingly, we were able to get our product on the features page of Product Hunt within an hour of launch.

But then, in the next hour, the Product Hunt team told us that they are going to un-feature the product since it’s pre-launch.

We were a bit disappointed but didn’t get discouraged. We decided to continue sharing the product on more platforms.

In the next few days, we posted the product on Reddit and Twitter and got a few more signups. 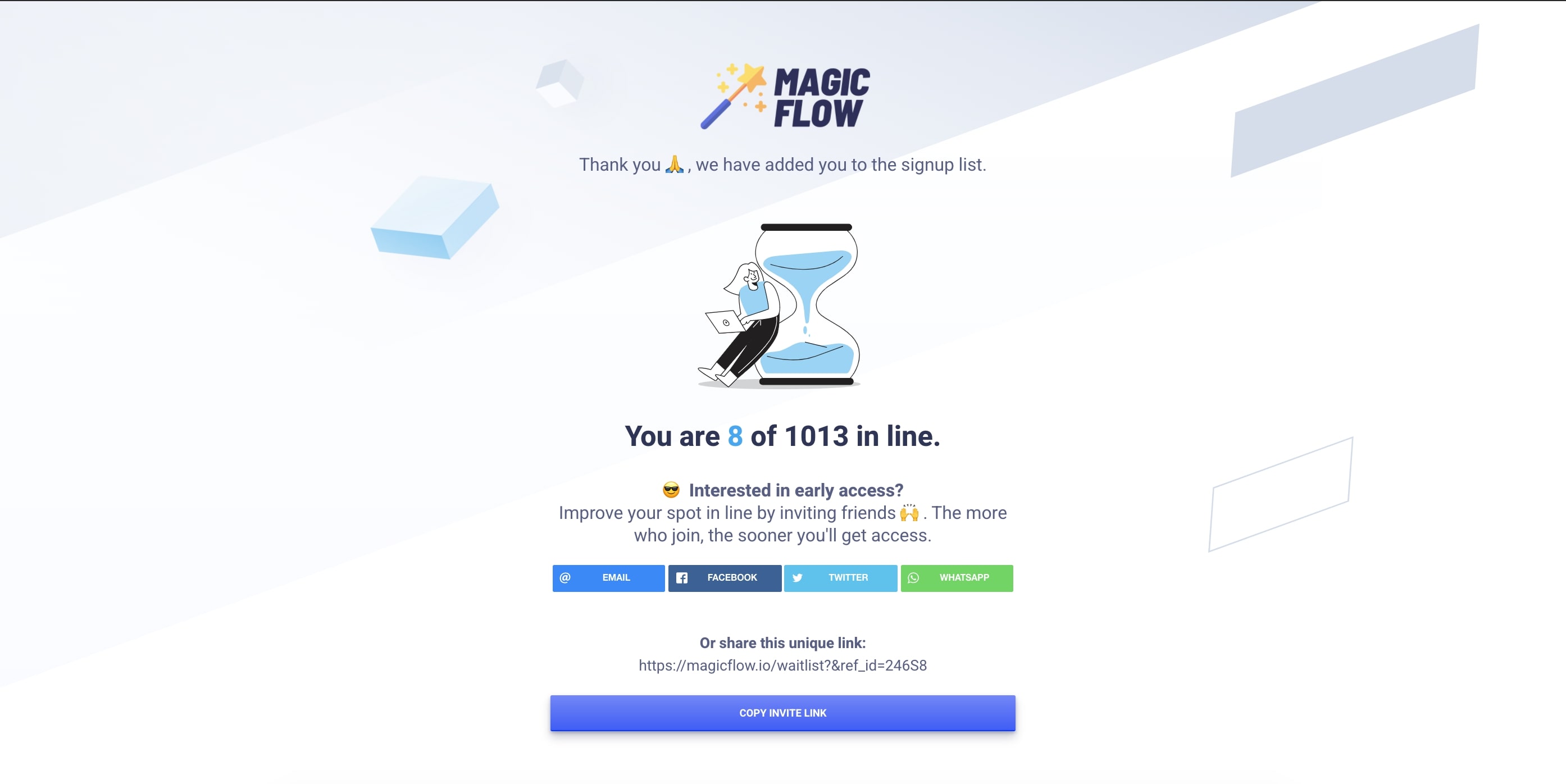 Out of these signups, about a third of them came from Product Hunt, about 200 came from Reddit and Twitter, and the remaining came from word of mouth promotion.

Overall, we are very happy with the initial traction.

There are a few learnings that we want to share with you:

1. Validate the idea before spending time on building the product

When we decided to build MagicFlow, we had no idea if our idea had any potential.

We just knew that we needed a product that would help us write better copy for our landing pages quickly.

By spending a couple of hours on building and launching the MVP, we were able to validate the idea.

2. Use tools that you are already familiar with and have a good grasp of

We reused our previous app’s boilerplate code to build an MVP within 2-3 hours. Most of the tools that we used in this project were tools that we were already familiar with.

Had we chosen a relatively new, fancier set of technology, it would have taken us many days to build the MVP.

We implemented a waiting list system to attract and capture the initial user base.

These users were our first customers. We used their feedback to build the initial version of our product, iterate it and make it better.

4. Post on more than one platform to increase your chances of getting traction

By posting on more than one platform, we were able to get a much wider reach.

That’s it for this post, folks. Hope you enjoyed reading it (despite my bad writing skills).

If you want to write better marketing content, check out MagicFlow. We are currently offering a 50% launch discount. So, hurry up and grab it.

Samanyou is an experiential learner who dreams, designs and builds exceptional, high-quality digital products and services. He also trains machines to teach themselves.